During the design phase of this parking lift (a design that is already used in similar fashion around the globe), all safety measures were considered. Operational life, duty cycle, load capacity, load specifics and desired control characteristics were all addressed.

Like every lifting ppuroduct that BendPak designs and manufactures, operator safety is always the first and foremost concern, with redundant systems being incorporated if and when the space or design accommodates. In the case of this hoist series, however, an open-center span with some form of integrated slack-cable system proved overly complicated. It would have introduced greater forms of risk and/or potential failure modes. Instead, we designed the car hoist using safety factors far and above the allowable stress design methodology for typical systems. 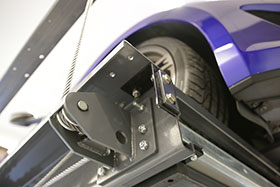 Each platform on our PL-6KDT parking lifts and PL-6KT parking lifts, if and when loaded to the max capacity, is able to suspend 6,000 lbs. This means each respective corner holds up to 1,500 lbs. For the suspension cables, we chose to use 12 mm 6x25 IWRC galvanized wire rope with a certified breaking point averaging 23,000 pounds at each corner. That puts the safety factor of each suspension cable exceeding 15x at the maximum load.

A wire rope differs from other structures such as a chain, as by nature it is a redundant system. In other words, a multiple redundant structure made from a number of parallel load-bearing elements, all twisted together to allow the assembly to operate as a cohesive whole. Friction between the individual wires and strands, as a consequence of their twist, further compensates for any flaws. Wire rope and its use in lifting and suspension systems evolved from wrought iron chains that had a record of mechanical failure. Flaws in chain links are rarely evident until failure mode is reached, typically resulting in catastrophic failure, while flaws in wire rope are typically easy to observe as the individual strands fail.

Although slack cable safety systems are indeed a functional and highly used component in many lifting systems, they are not mandatory if a proper design criterion is addressed. If slack cable systems were the only means to ensure safe operation, equipment like construction cranes, ski lifts, suspension bridges and helicopter rescue cranes—all playing key roles in human existence—would only be found in fiction.